Year Long Song Lists! The winningest game you can play!

A number of years ago I made a new year's resolution (a novelty for me, someone who has demonstrated precious little appetitie for self improvement in ever), which was to try to find a song that's new to me on average once a day - so I aim for 365 (or 366) songs per year. It's a great little challenge to yourself, and it's a game I recommend everyone try!

It started because I was getting frustrated that I would find a new song that I would like, but if I couldn't call it to mind, it would be lost to history forever. This is very much a 21st century first world problem, but it harkens back to the first family computer we had (in the twentieth century), which had a whopping 20MB of onboard storage - equivalent to about seven songs in mp3 format. Useless in other words. Often when I was on the much-missed AudioGalaxy and another song was queuing up for download, I would have to choose one of the ones already downloaded for culling. It was a cruel time, similar to the savage Spartans who would chuck their own babies over a cliff if they didn't display physical prowess from birth. 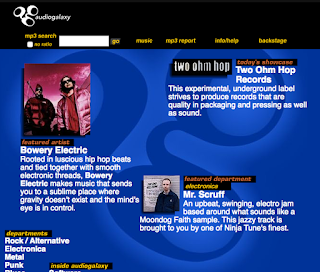 Eventually Steve Jobs came up with the answer - the iPod (early mp3 players also had an issue with very limited storage space), so I was able to start burning all my CDs onto iTunes, and even burn everyone else's CDs when I got the opportunity! It was a glorious exercise in sharing the gift of art, and if I didn't have it, it's probable I would have forgotten about the artists who I would consider my favourites today.

I had perfected a wonderful system of Smart Playlists, where if I heard a song on my iTunes or iPod, it wouldn't play it again for a number of days, unless I had rated it 5 stars out of 5 (ie my favourite songs to hear), when it wouldn't play it for the rest of the day. I discovered multitudes of new music this way, from the rock and metal I was into from my teens, to the different types of Jazz, classical, world and just checking out genres to see what was going on, to what I now consider my favourite genre - the 2000s north American indie music of the likes of Arcade Fire & Modest Mouse. 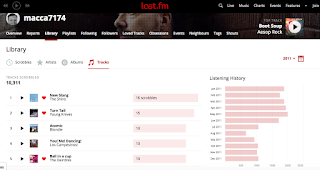 But then that was frought with it's own issues - hard drive failure, which I fell victim to on two seperate occasions, with the loss of around 22,000 mp3s. Luckily, I had been paying forward the gift of sharing, and was able to claw back most of what I'd lost by just copying my library back off friends (with the bonuses of their interim additions), so I was mostly able to claw back the large bulk of my library, but I'll probably never find the random songs I would speculatively download and stick in the Random queue.

Eventually I made the switch to Spotify. I had dipped my toe in the water for a number of years, but never fully made the plunge (I cannot justify why I was so reticent, it was literally everything I had wanted - pretty much all recorded music at the end of my fingertips). But then algorithms start to force themselves upon you, and thinks that if you liked listening to Smells Like Teen Spirit once, you'll always want to listen to Smells Like Teen Spirit! It becomes an echo chamber, and invariably it will start to churn out ecery band's Wonderwall - the famous song that a band has, but the band's fanbase have probably grown tired listened to. Oasis' is obviously Wonderwall, Rage Against the Machine's is Killing In the Name, James Brown's is I Feel Good, and so on.

So I went back to my old methods, of just hoovering up any song I could find that caught my ear - and with the miracle of Shazam, it's made it incredibly easy. I could hear a song in a bar, and within 30 seconds have it added to that year's list. Then I would just hit shuffle on that list and the better songs would enter my consciousness by osmosis.

I did actually hit the 365 once, about fifteen minutes before midnight on New Year's Eve - I just snuck I Like to Move in the Night by Eagles of Death Metal into the 2018 - A Year of Living Dangerously list (and made the title fo the list all the more apt!).

In all the other years, I've missed the target, but a definite pattern has emerged. At the start of the year there's a glut of new stuff from all sorts of places; around March I'm listening to a lot of Irish and folk music; summer is usually the big hits of the year have become established; then around September I start falling behind, but I've usually built up a big enough back catalogue that I'm ahead of the days count; then in October there's a load of heavy metal; and by late December I'm trying to find new Xmas tunes.


2020 has been an interesting one, since there hasn't really been much new music released, although the list is mostly older music - it's songs that are new to me. I'm currently on 262 songs, and I'm writing this on day number 329 - but it's all good, because the best thing about this game is everyone's always winning!

Press Release Omagh Actor in Irish Premiere of Arthur Miller’s Play ‘Incident at Vichy’ Omagh actor, James McAnespy is to appear in the Fringe Benefits Theatre Company Company production and Irish Premiere of ‘Incident at Vichy’, Arthur Miller’s one act play set during the round up of Jews in Vichy France in the Second World War. Ten men are held prisoner by fear, with no way out and only one final solution. The play is at the Crescent Arts Centre on the 4th, 5th, 6th of November 2010. Tickets are £8 and £10 and available at the Crescent box office and online at www.crescentarts.org. ‘Incident at Vichy’ is an exciting production that explores the themes of guilt, denial and complicity with the state forces of authority at the start of the round up of Jews in Vichy France in 1942. It is directed by Adrian Cooke and co-directed by Cathy McCullough from Fringe Benefits Theatre Company. James McAnespy, actor with Fringe Benefits Theatre Company, said: “I have wanted to act in this p

I’ve been interviewed in the excellent Dublin based website ExplorinDublin.ie about New Ireland TV Read it here!

Revival of Arthur Miller's Incident at Vichy in the Belfast Synagogue

Fringe Benefits are reviving Arthur Miller's Incident at Vichy at the Belfast Hebrew Congregation, Wolfson Centre on Sunday March 13th. Following on from the sell out run of the Irish premiere in November 2010, popular demand, and a specific request from Jewish community in Belfast has meant the show has been revived as part of the Jewish Community festival. This is great news for the company, and it will be great to get the show on again for all those who were unfortunately turned away at the door due to the high demand for tickets during our last run. The same high demand is expected again, and added to the fact that the tickets will be free, if you intend to go, ensure you get there early to avoid disappointment. The Belfast Hebrew Congregation is in Wolfson Centre, 49 Somerton Road, BT15.

Pictures from the Edinburgh Festival