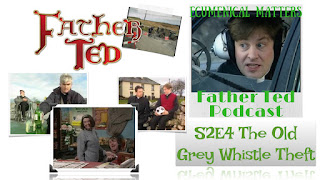 Donny Kingston, up and coming stand up on Belfast's comedy circuit, helps unravel the mystery of the stolen whistle and stave off complete societal breakdown on Craggy Island. It's just a whistle!

Dougal's finds a cool new friend in Father Damo (played by Joe Rooney), and gets to show off his football tekkers. Ted tries to relax on a picnic site, but unfortunately he runs in to a couple of fupping baxters. Mrs Doyle is on night duty and Jack displays his ninja skills with a couple of bottles of Jacob's Creek Chardonnay 1991.
There's another score in our Meet Your Maker feature, so who is that shows up, Graham or Arthur? Larry Duff actually answers his phone! It's not good news though. The Blur/Oasis rivalry gets a sermon (remember Feile 95? What a line up!), as does Street Fighter 2; bad piercings and Belfast's murals and checkpoints.
Father Ted podcast YouTube